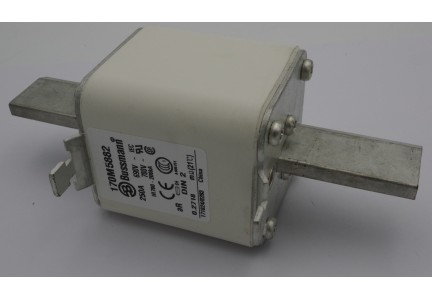 Rated Current The rated current of this fuse range has been given with copper conductors that have a current density of 1.3 A/mm2 (IEC 60269-4). For conductor cross section according to IEC 60269-1, the fuses with a rated current higher than 125A must be derated. Please contact Bussmann for application assistance.

Total Clearing I2t The total clearing I2 t at rated voltage and at power factor of 15% are given in the electrical characteristics. For other voltages, the clearing I2 t is found by multiplying by correction factor, K, given as a function of applied working voltage,

Arc Voltage This curve gives the peak arc voltage, UL, which may appear across the fuse during its operation as a function of the applied working voltage, Eg, (RMS) at a power factor of 15%.